The National Society for the Prevention of Cruelty to Children dates back well over a century.  It was granted a Royal Charter, by Queen Victoria, in 1895.  The NSPCC is the only UK charity which has been granted statutory powers under the Children Act 1989, allowing it to apply for care and supervision orders for children at risk.  Childline, the charity founded by Esther Rantzen, became part of the NSPCC in 2006.

In summary the Lesbian content is extremely limited.  Where two females are included the word Lesbian seems to be verboten.  Even the Gay males, who do get more coverage, seem obliged to reference the fluidity of their sexual orientation, identify as Queer  but avoid any expression of an, exclusively, same sex orientation.

Here is a summary of their content and how much time it devotes to sexual orientation.  I have been very generous in assigning the label Lesbian to the two I cover here.  They are clearly female couples but do not mention the word Lesbian.   Two of the posts left me in doubt about the sexuality of the interviewees.  Asexual, we are told, covers 1% of the population and yet is given two YouTubes. Trans coverage is given 21% of the content and all the LGBTQ+ invariably foregrounds the T.   The content for Gay males is higher but many pay lip service to the idea of Gendered Attraction, as opposed to being confident in proclaiming their exclusive sexual attraction to biological men.

Below the NSPCC endorses controversial charity Mermaids which advocates for “Trans Kids”, campaigns for earlier medical intervention, and suggests children struggling with Gender Identity issues need to be safeguarded from parents.  Mermaids think any parent who fails to agree  their child is #BornInTheWrongBody is abusive and places their child in danger of suicide. They do this by referencing extremely dubious statistics. 👇  Suicide in the Trans Community

Do the NSPCC also agree with this characterisation of, parents of kids with Gender Dysphoria, as abusive if they dont’ medicalise?  Their content is replete with the notion that sex  is merely “assigned at birth” and they are confident signposting children to Mermaids. 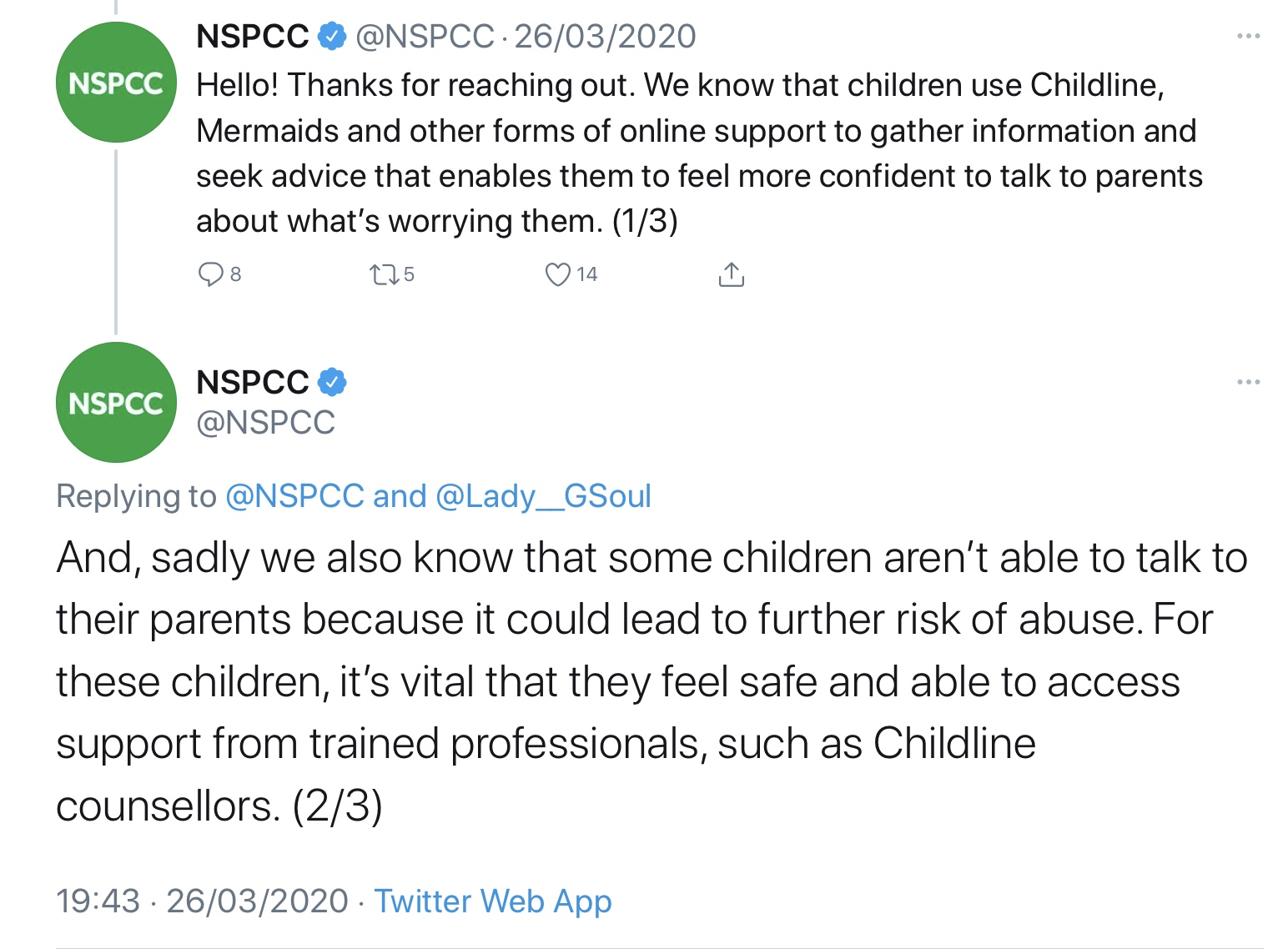 They are also meeting with Stonewall. Once a venerable advocate for Gay rights. Now in total thrall to the Trans Lobby. Peter Wanless is the head of the NSPCC and Gender Identity Ideology has been peddled to vulnerable kids on his watch. 👇

I also had a delve into any content about women’s rights and unearthed this content.  Even in content about women we are obliged to pay homage to the idea of Self-Identifying Women/Men. Abject nonsense about “people with periods”.

The NSPCC have also received some media coverage today for a Nude Family Swim which is an event at Waterworld in Stoke.  Apparently the NSPCC were involved in developing the Safeguarding policy.   I wish we lived in a world where childhood innocence was protected but it is naive to, implicity,  endorse activities such as these 👇

Archive link to the article https://archive.is/3oJcl

I doubt I would have been moved to look at the NSPCC were it not for the responses they issued to people raising concerns about some disturbing social media activity by one of their employees.  Full Story is below.

This story of James Making, a former employee,  of the NSPCC until he was eventually Let Go is illustrative of how far this charity has lost its way,  James  was responsible for the short-lived role of Munroe Bergdorf, a trans activist, at the NSPCC. He then became known for more notorious activities at his place of work.   This one story ought to have been a wake up call for the NSPCC but I fear they are unable to change course.  I include this woeful tale because it is indicative of how the adoption of Gender Identity Ideology and the obsession with LGBTQ+ has clouded the Charity’s judgement.  When you make any community into a modern day “Priest class”  your critical faculties become dimmed.

James was the NSPCC employee responsible for hiring a Transgender model/ activist as an advocate for the charity.  Munroe had previously lost other roles after previous social media activity came to light. L’oréal, The Labour Party & the BFI were three such roles. Once the NSPCC post was announced the public backlash began. Munroe presents a highly sexualised image of what they believe to be female presenting. Potentially more worrying were public invitations for troubled children to contact them directly. As many people pointed out this showed a naïveté about safeguarding children. The model had posed for playboy, and solicited messages from “transkids”

The unsuitability of this role model is amply illustrated here 👇

Munroe also posted some invitations for children to contact them directly, via social media, in an ill-advised approach to #ChildSafeguarding.

The NSPCC dispensed shed with Munroe’s services, not without a hint of denial about their role, despite having publicly announced it. 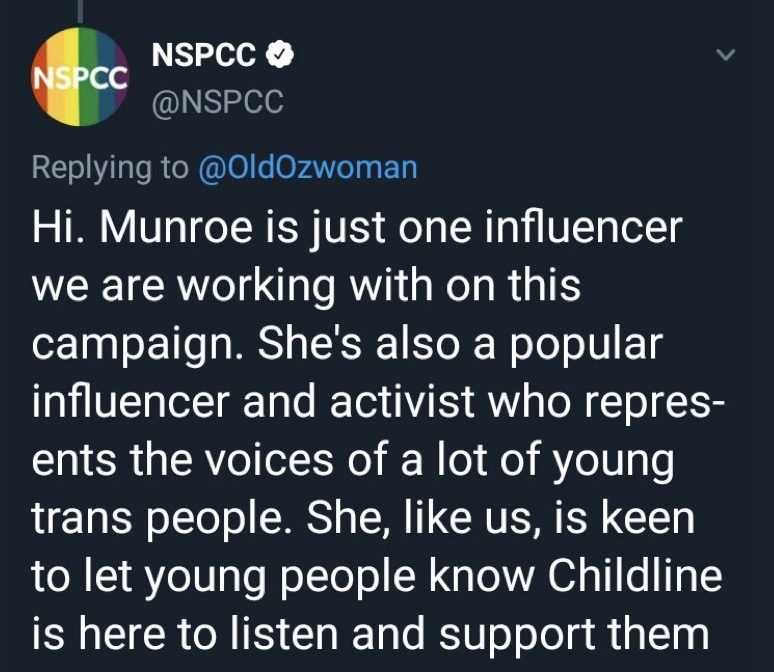 Later they would issue a grovelling apology, to Munroe, for the manner of the sacking.

Here is the statement  👇

When the masturbatory antics of Mr Making were revealed the NSPCC’s Immediate response, astonishingly, was to berate people for raising concerns! It also accused them displaying homophobia and attacking their staff. Other high profile Guardian writers joined in 👇

You can read more on this, by Jo Bartosch here

Here are a couple of clips from that article and one (censored) from the post made by Mr Making.

The NSPCC remained silent for some time until it emerged that the employee had been sacked.

The  NSPCC openly proclaims  that it’s priority is their  LGBTQ credentials.  My reading of their content shows they are committed to the Q at the expense of the rights of people who fought to gain legal protections for their sexual orientation.

Lesbians?  Not so much.

Researching Gender Identity Ideology and its impact on Women and our Gay Youth. Support is always appreciated (I have no income). All my content is open access so if you can’t speak publicly, and you have spare cash, this helps me maintain some independence.

One thought on “Queering the NSPCC? FINAL”