The National Society for the Prevention of Cruelty to Children dates back well over a century.  It was granted a Royal Charter, by Queen Victoria, in 1895.  The NSPCC is the only UK charity which has been granted statutory powers under the Children Act 1989, allowing it to apply for care and supervision orders for children at risk.  Childline, the charity founded by Esther Rantzen, became part of the NSPCC in 2006.

What does Heteronormativity & Heterosexuality mean?

This episode features an interview with Calum McSwiggan who we met earlier in Queering the NSPCC? Part Three. 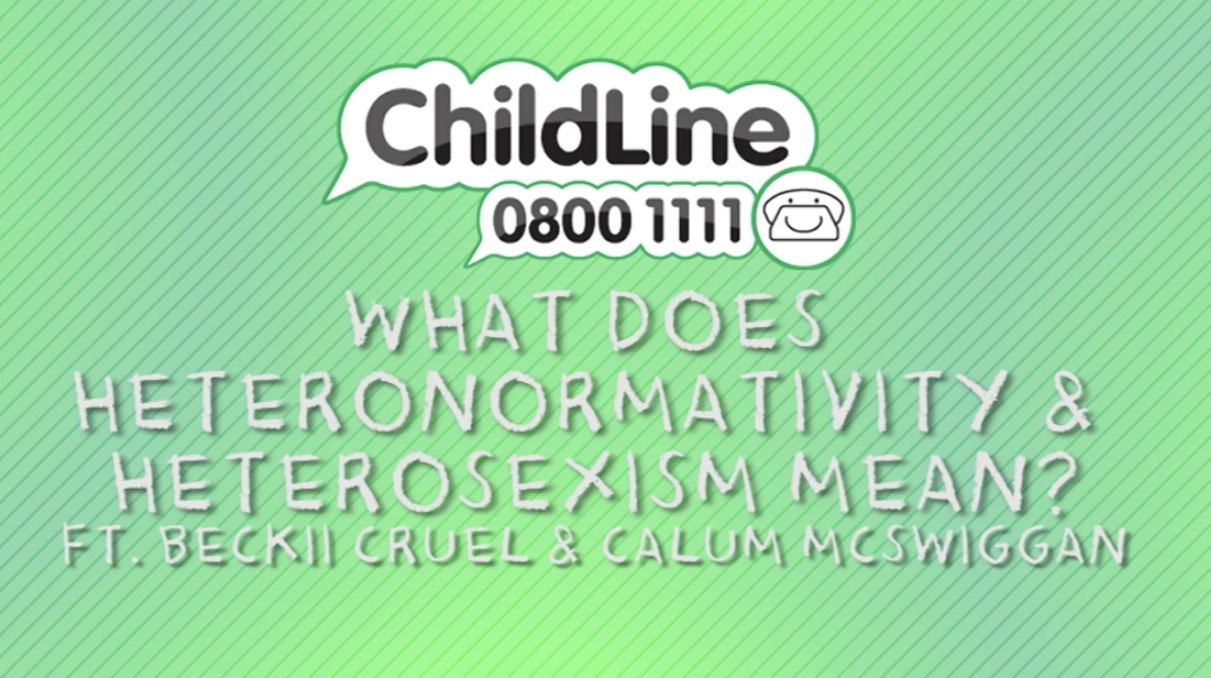 Calum is a Gay male, here he is in conversation with Beckii, a young woman whose sexuality is not made explicity.  Here they team up to  teach us the meaning of “heteronormativity” and “heterosexual”.

You can watch it Here

You can read a transcript here: Challenging Heteronormativity Child Line

First off.  Its not a bad idea to challenge assumptions that *everybody* is heterosexual.  There is every chance a kid who doesn’t perform sex sterotypical behaviours is not heterosexual.  I don’t propose to expound on whether this is hard-wired, #BornThisWay, or nurture. It is, however, one of the earliest signs a kid  will grow up Gay. This early sign allows parent’s, like me, to signal acceptance in a number of ways.  For me, I always talked about futher relationships in terms of “she” or “he” so  my son knew this was perfectly acceptable and supported by his parents.  So, on the face of it, challenging heteronormativity is no bad thing. 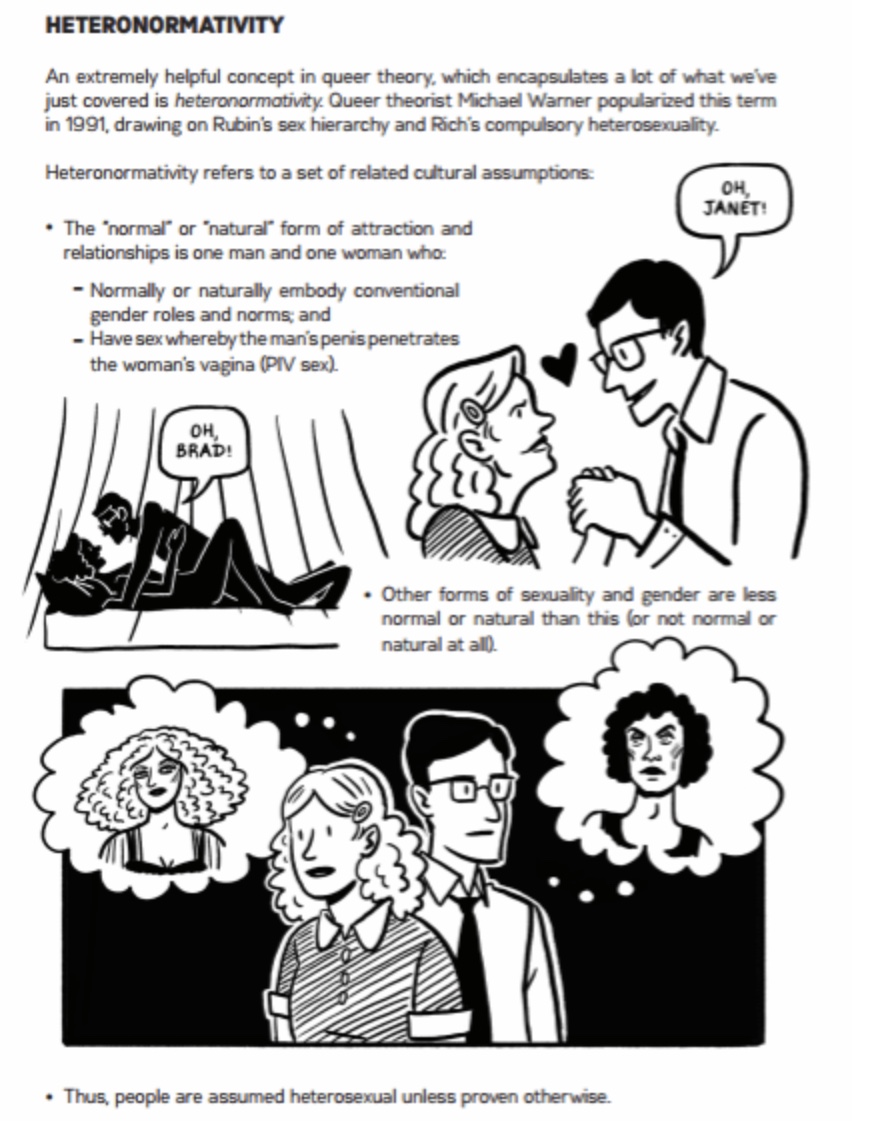 The conversation explores the impact of  expectations of heterosexuality on kids who have a sense they are different /  don’t conform to gendered expectations for their sex.  One of the main concerns with this topic is the conflation of  early signs of future homosexuality with being “trans”.  The interviewer  does this early on with the statement below. Here an effeminate boy,  or a masculine female, immediately calls into question, not just their sexuality, but their sex/trans status.  It is this way of thinking that can have a disastrous impact on the gay community.  What could be more “heteronormative” than equating same sex orientation with the idea that you may just be “trans”.  If an effeminate boy, attracted to males,  is really a woman does that not make him straight?  Is this not the ultimate in elevating the new version of heterosexual as the “norm”?

Calum continues the theme. “We’re brought up in a society where you are kind of expected to be cisgender, you are expected to be heterosexual”.  What he fails to see is that Gender Identity ideology  puts a massive question mark over the sex of, gender non-conforming, Gay males and Lesbians. Even  though we know this behaviour is one of the earliest clues  someone may grow up homosexual, we are offering the alternative narrative they may be #BornWrong.  How is that progress?

I have written about this many times here is one piece  The Woke Gay Conversion Therapy?

I have also written about a project funded by the Government Equality Office which illustrates how this approach is being used in Primary Schools. That Equaliteach Project

Another common theme, on my blog, is the impact on child safeguarding.  Anyone following my work will know I have a Gay son who also has Gender Identity issues.  As a school boy he did not use girls spaces. (He still doesn’t).  His circle of friends was wholly female.  When sleepovers became a feature, of these friendships,  he was excluded.  His exclusion was the parents prerogative. It was never driven by unkindness. They had daughters and they did not know my son. We both respected the parent’s decisions.  He was included in one sleepover and he was delighted. The parents knew him and it was their decision.  I am not going to lie, I secretly had a bit of a cry when he was invited.  However an individual invitation should not translate into blanket inclusion. It  should not be a default expectation. (Fun fact. He was 11 and those, sugar and spice, girls sent him home with manually pierced ears!)

Anyway, I digress, Gemma here doesn’t get #ChildSafeguarding and, by extension, neither do #ChildLine .  This is not about heteronormativity it’s about girls’ rights to set boundaries and not to be shamed about necessary exclusions.  👇 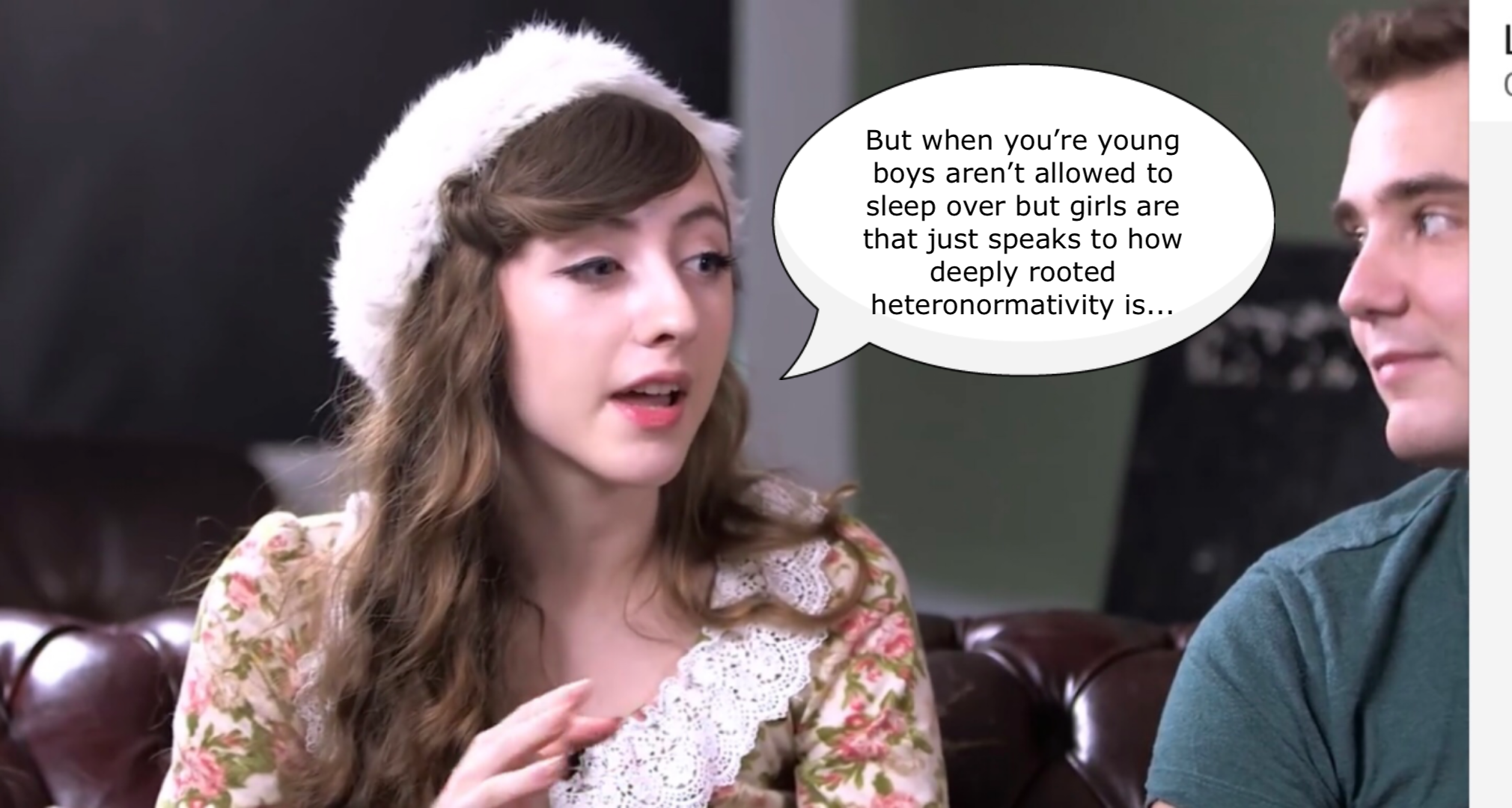 Again one of the central difficulties is that we are telling people that you can neither tell anyone’s sexuality or gender by the way they present themselves.  This is problematic for all sorts of reasons, and not true, wholly, in either case. Gaydar is a thing and thank goodness it is for the dating ability of Gay Males and Lesbians.  Detecting biological sex is also hard-wired and doesn’t change because of the massive strides in surgical mimicry. 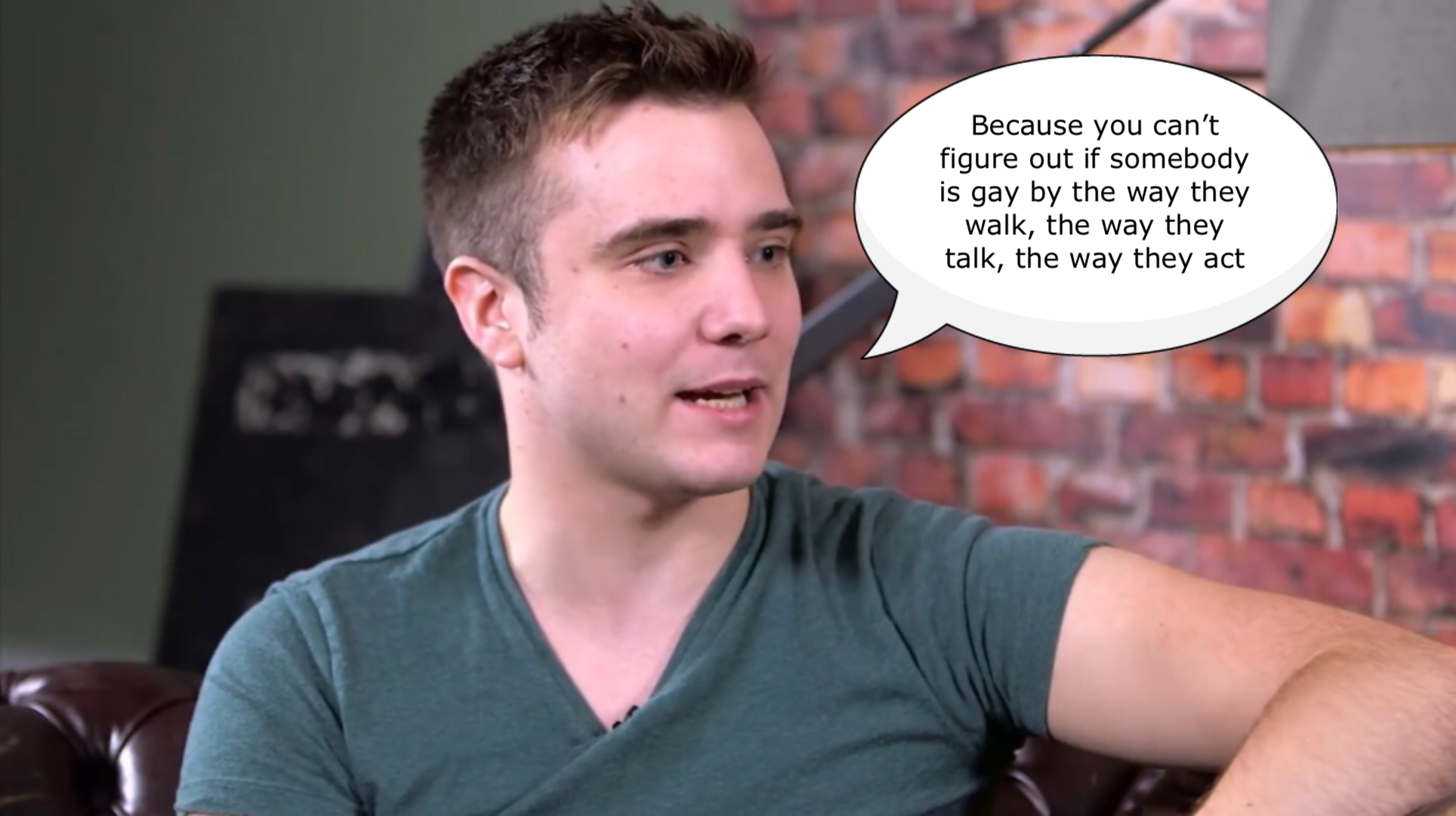 I watched two gay men discussing this on Arty Morty’s youtube.  Duncan, a gay man, tells a tale about identifying the one other gay man in a nightclub before either of them were out.  Calum here is being disingenuous.
Closely followed by Gemma who extends this to deny we have any ability to correctly “gender” people.  Er. We can sex them though! 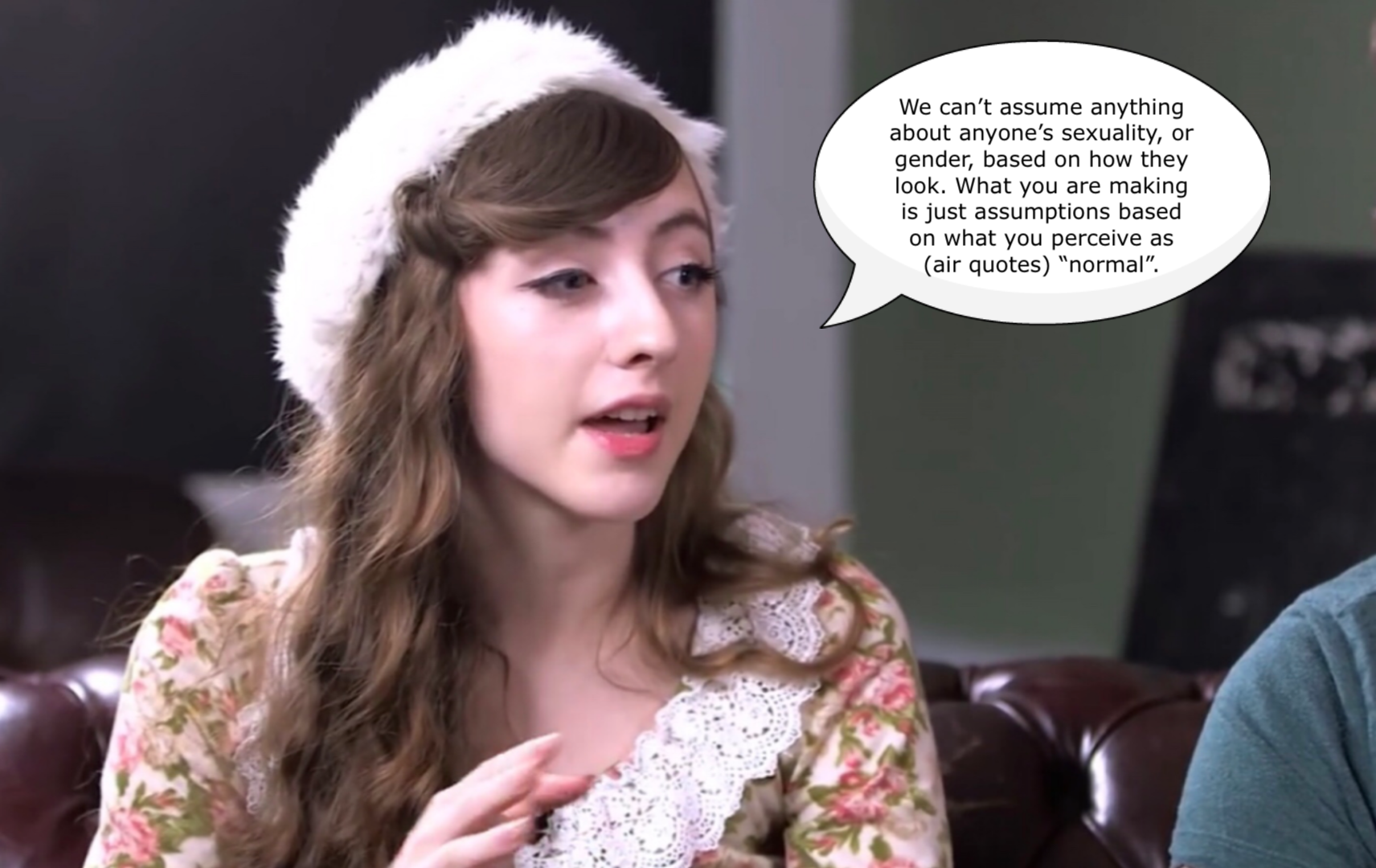 This is duplicitous stuff.  We don’t just detect sex for mating purposes. Women detect males because it has a huge impact on how we manage our safety in certain settings.  This ideology tells us a) that  it is bigotry to recognise biological reality b) tells us we have to accept bearded males as females and even lesbians!  Cue Alex Drummond.
Stonewall Ambassador! 👇 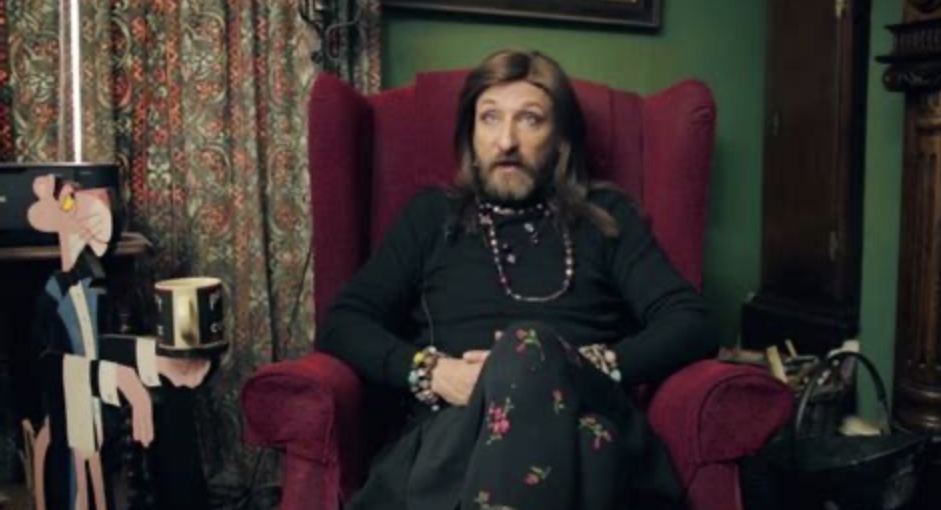 Alex has delivered school talks about being a Lesbian!  This is Gaslighting!

I too would like to see some understanding of different sexualities and family structures.  The fact remains that most people live in heterosexual couples. It cannot be beyond our wit to make sure that children know there are different family structures. Not all of the children will end up in heterosexual relationships. I have no objection to this being signalled, even in primary school. This would allow  chidren who may already have pre-sexual, innocent crushes, on the same sex, feel “normal”.  We don’t have to wage a culture war on heterosexual norms just because heterosexual relationships are the majority.

You will not achieve acceptance for one sexuality if you attack another’s as somehow “invalid”.   It really isn’t a good tactic.   The sex denialism in Gender Identity Ideology is unmoored from biological reality and sexual desire.  There is a conflict with the protection of women’s rights to sex segregated spaces and the right to be exclusively same sex attracted.   The sooner politicians and Gay Rights Activists wake up to this the better.

We risk reversing progress made over 30 years! 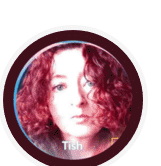 If you want to support my work here is my paypal. Please only do so if you can afford. Any amount will help. tishnaught@me.com

One thought on “Queering the NSPCC? Part 10: Heteronormativity”