This article is base on this youtube presentation, by a member of staff at Tavistock, from March 2018.  You can watch: here.

Here’s a transcript of the talk TAvistock part 3

The speaker is Dr Aiden Kelly, a Clinical Psychologist, who works at the Gender Identity Service (Tavistock). He practices at the London base but spends time working with services in Ireland.  The service is for under 18’s only,  it does not cover any surgeries.  I am going to focus here on what he says about the medical interventions. [I will do another piece on what he shares about the diagnosis of Gender Dysphoria].

In the  overview of the service, he is keen to emphasise that the service is not “outcome specific”.  The role of the Tavistock, we are told, is to explore Gender Identity confusion and not  merely affirm a cross-sex /transgender identity. This talk is from 2018, is this is still an accurate description of the service?

He  shares some quite dramatic information on the  rise in clients.

He explains that referrals in 1989 numbered three, by 2010 rates were doubling annually and, by 2016/17, they hit 2000. At the same time the sex ratio of referrals had  completely inverted to comprise  predominantly females.  75% female whereas only a decade earlier the service would have catered to  75% males.  Aiden  is puzzled by this growth and appeals to his audience for help: ⇓

Over the same period there has also been a significant rise in male referrals, who are sometimes forgotten, however the shift to females is very pronounced.  The  surge in numbers and the changing sex ratios, should have given the service pause for thought. Were the  existing treatment protocols fit for purpose for a new demographic?  The  obvious angle would be to look at this through the lens of “sex”. Does this not occur to the speaker because he sees through the prism of  “Gender Identity”?  By framing sex as something “assigned at birth”, and treating it as a post-modernist, pick and mix are we enticing refugees from femininity with an, illusory, escape route?

One  response to the growing numbers is to increase staff/services able to deal with rising referral rates.  However, it  was not the only possible response.  Here an ex member of staff , and Tavistock whistle-blower, suggested an alternative: Halt the service until you figure out what’s going on . ⇓

The above clip is from this article in The Times.  https://www.thetimes.co.uk/article/it-feels-like-conversion-therapy-for-gay-children-say-clinicians-pvsckdvq2

In reality the response was  service expansion. Furthermore the people disseminating the training, for new providers, are drawn from the existing pool of specialists. This pool of early adopters tend to be deeply committed to the idea we all possess an innate gender identity and sometimes this is at odds with our biological sex.  Here is how Dr Aiden sees his role.  De-mystifying what he does, over-coming the fears of new practitioners and dispelling the notion this is some sort of magical or crazy process.

The jury is in out on whether what we are doing to young people comes under the heading crazy.

Here is a slide Aiden shares on the interventions that GIDS provides, for kids presenting with Gender Dysphoria.  He is keen to emphasise that it is not all about physical interventions, although it does include them.  The approach he describes sound’s eminently reasonable. It moves from reversible to irreversible.

Additionally, on the day I write this, a segment on Radio 4 has finally covered the revised NHS guidance which no longer calls puberty blockers “reversible”.  (Link here though it will only be available for 30 Days)  Radio 4 link re Puberty Blockers

Here is a transcript of the Radio 4 segment done by a twitter user (handle included and permissions sought)  Transcript. Radio 4 30th June

Summary: They are not just a pause, not fully reversible and are largely experimental, for kids with Gender Dysphoria. (They also have their critics when used for Precocious Puberty, though this is established medical practice).  In this talk Dr Day  claims

they are fully reversible and only pause puberty.  This would now appear to be recognised as false.  Note also that, as of March 2018, the Tavistock protocol is that children be allowed to go through a partial puberty, as he explicitly says in this second clip This is important for young people to get an idea, not just of their Gender, but also their Sexuality.  Below, Dr Aiden, expands on this important issue. He concedes  a few important points.

The lack of research. The experimental nature of the treatment. The fact that many of them won’t persist in a wish to change sex. Here Dr Day uses an estimate of a 50/50 split between those who would persist and desisters.  I have done many blogs looking at  rates of desistance and, whilst the research is contested, a figure of 80% would seem to have  more validity than a split of 50/50.

In this clip we are conceding that puberty is pivotal. The clinicians work with the family to identify the right approach but then put the responsibility on the parents! Why? Because the don’t have the evidence to know which kids would have been among the  desisted community. Let that sink in. The clinicians are not sure so they are making it the responsibility of the parents. They also fear that these kids may come back to them in 10 or 15 years time. Dr Kelly uses an example a returner who says they did the right thing, but its clear the fear is  regret from those subject to early interventions. This extract illustrates the clinic have a very nice get out clause.  It was you/your family that agreed to this.  [I see many de-transitioners accepting a personal  burden of regret. I look forward to the day when they externalise this anger and direct it at the people who perpetrated this medical malpractice]

Here are a few startling admissions.  In theory the blocker

could be available as young as 10!  The current , public, protocol published by the Tavistock has an age limit set at age 12.

Here he demonstrates awareness of  how ill-informed young clients are on the impact of puberty blockers.  The impetuosity of youth should not  be discounted.  In fact  there are many side effects to the blocker and here is a surprisingly honest account. Mood difficulties may be worsened. It also suppresses sexual interest. Here he seems to be avoiding explicity stating that sex drive will go. ⇓ 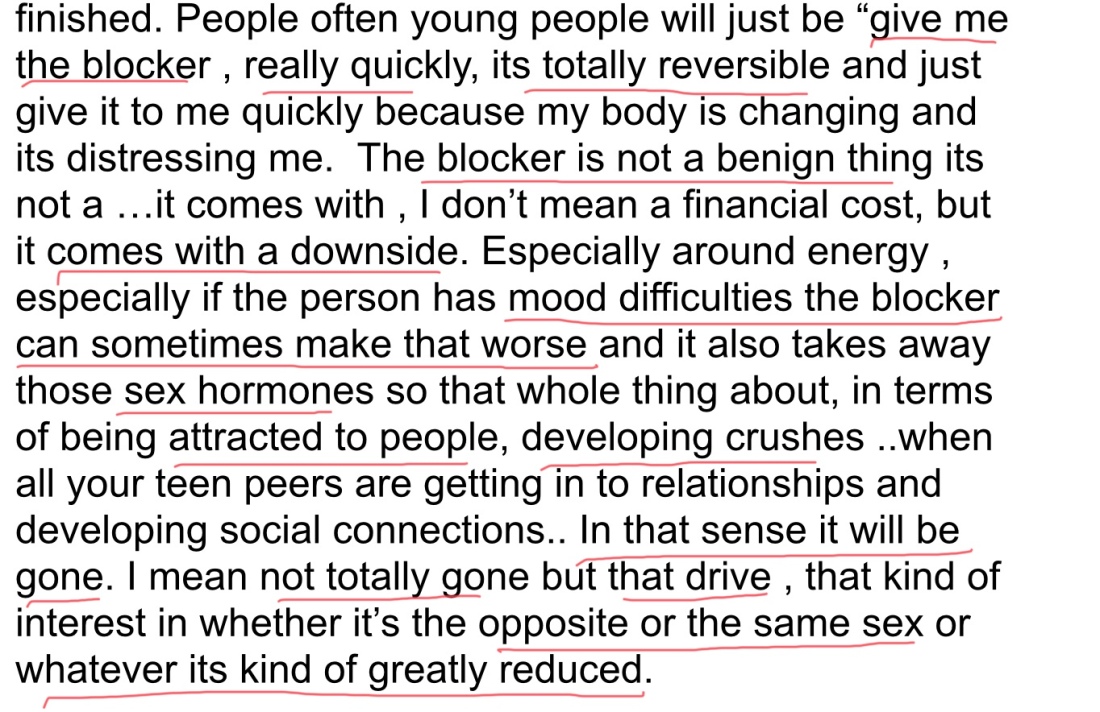 I would never agree to any treatment that I thought would imperil my child’s sexuality.  I fear many affirming parents are not in full posession of the facts and are terrified by the spectre of suicide. They should not be Suicide in the Trans Community

The next stage in treatment is Cross Sex Hormones.

These are not fully reversible treatments and we are giving them to 16 year olds.  Reminder: It is illegal to tattoo anyone under the age of 18 under UK Law. We all know people who regret their tattoos, even those done well above the age of 18.

Below are another two clips highlighting that, even if you meet the criteria for Gender Dysphoria, you may find a way to accept your biological sex. (Though he doesn’t use this phrasing)

So we need to know that any diagnosis is based on incontrovertible evidence but we know that this is not the case.  Here we see one tool which is described as a useful way to think about “Gender”.  Yes!  Its the Gender Unicorn. I will do another post on the Diagnostic criteria but for this blog its enough to post this clip. 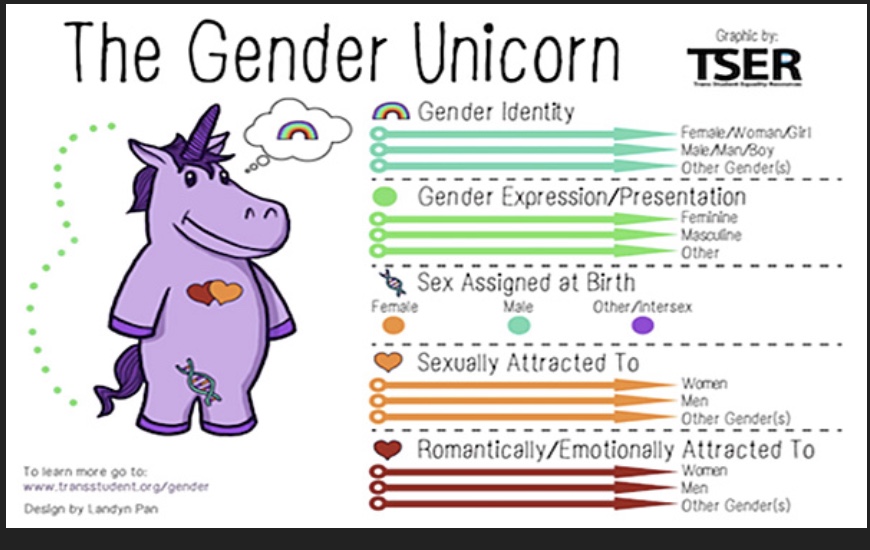 This slide completely  undermines Sexual Orientation by conflating it with attraction to Gender.  It insults people with Disorders/Differences of Sexual Development /Intersex by calling them an “other” sex.  People with DSDs are not a third sex. Humans are sexually dimorphic. Just a few things wrong with something promoted as a useful, diagnostic, tool.

So, which groups are we medicalising?  People with autistic traits account for a whopping 30%  along with people suffering depression, self-harm, and bullied youth.  Many of the people the clinic sees are already wrestling with a myriad of issues, as is well documented.

I am somewhat surprised to see there is no data shared here about the proportion who are same sex attracted. We know this was a considerable part of the demographic from earlier research.    He does note the prominence of bullying, but its a shame he doesn’t  single out homophobia. We know gay youth are more exposed to negative social interactions which can lead to Gender Dysphoria.

Below is another clear statement made that cross-sex hormones are definitely not fully reversible.

From my observation, and parental report, it does seem  Testosterone operates  quickly, and dramatically, on females.  Who, lest we forget now  who comprise 75% of referrals.

The changing age, and sex, of the referrals is a huge concern.

The parents concerned about behaviour, inconsistent with sex stereotypes, do seem to figure prominently in public proclamations about Transgender Children.  To his credit Dr Kelly rejects pathologizing this sort of behaviour in children as young as five.

He does face a new kind of parent as he goes onto explain. A whopping  90% are being socially transitioned by the time they come to the service.  He is very clear about this. It is a social experiment, they are worried and they don’t know what impact this will have on their pathway.

The speed of the change has clearly taken the clinic by surprise.  The societal embrace of the “Transgender Child” has swept our society at breakneck speed.  Only a decade ago some of the practices we are seeing today would have been unthinkable.

This clinician positions the clinic as resisting the dominant affirmative narrative and resultant parental pressure.  He claims that the clinic to maintain a middle course.  I would suggest the “try” in that sentence speaks volumes.

He leaves us with some Take Away thoughts.

To answer the final question posed above. My position on gender non-conforming children is they are fine as they are. They may be proto-gay children/ adolescents. They may be heterosexual females who are rejecting limiting sex stereotypes  imposed upon them. They may be autistic females (and males) looking for an explanation about why they struggle to accurately perform, socially mandated, gender roles.

The answer to all of this is that gender roles are not wholly “natural”. They are often performative. We have had Butch Lesbians and Femme Gay males forever.  Why are we making this so problematic? Why are we  willing to medicalise gender non-conformity? Where are so many, prominent, Gay Rights organisations going along with this?

3 thoughts on “TAVISTOCK PART THREE (A)”